Scarlet Santa Coord (スカーレットサンタコーデ, Scarlet Santa Coord) is a campaign rare coord made by the sexy brand Perfect Queen. It debuted in Part 5 of the Data Carddass Aikatsu Stars! Wings of Stars series as a part of Aikatsu! Santa Dress Campaign and did not appear in the anime.

A scarlet top with thin gold lines adorning it to match the ornate border, which is accent by black details and a sapphire gem in the center. Fabric is cut out on each side of the navel, with several crystal shards, pearls, and gold stars surrounding a black and gold diamond with crystals and rubies adorned on them. On either side is a purple gem. White fluffy fabric circles the top of the chest and shoulders, adorned with gold bases held by a large sapphire or ruby gem, and gold diamonds. Gold bead chains attach from this to the included choker, with an ornament hanging from both the front and back. The front has a star, while the back has a ruby and sapphire gem piece. Pearls surround a garnet gem on the choker. Scarlet gloves are included with a large star design on top of the palm and a gold bead bracelet. The cuff is made from white fluff.

A scarlet skirt designed to match the top, trim with white fluffy fabric that reveals a slight hitch in fabric on the left leg. Said corner is held by a scarlet and black bow that has a large sapphire in the center on a gold base. Gold bead chains hang from the waist, adorned with a crystal gem that alternates with a purple gem on a gold base.

Scarlet boots with a black and gold sole to match the design on the foot. White fluff circles the leg, starting on the corner of the ankle and ending above the knees, with the bottom portion adorned by a gold accent while the top has a sapphire gem in the center. Tiny gem shards and pearls line the lower leg, while the upper has gold and white dots, stars, and sparkle shapes. The top of the leg has black lace fabric lined with gold to match the ornate design beneath the cuff.

A white fluffy piece that has a sapphire gem attached to a gold base and three scarlet feathers decorated with tiny gem shards. Gold dangles are included with three ruby gems surrounding crystal pearls and a single, tiny black stone. 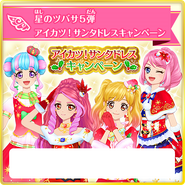 Add a photo to this gallery
Retrieved from "https://aikatsustars.fandom.com/wiki/Scarlet_Santa_Coord?oldid=141920"
Community content is available under CC-BY-SA unless otherwise noted.