Girls' Flag Coord (ガールズフラッグコーデ, Girls' Flag Coord) is a premium rare coord by the cool brand Spice Chord. It has debuted in Part 2 of the Data Carddass Aikatsu Stars! series and in Episode 20 of the anime.

A white tube top with a purple and blue band across the chest that has Spice Chord written in violet. The top has indigo lining and a row of silver square studs, and worn over it is a red sleeveless top with a low silver zipper and indigo straps, those around the shoulder lined by studs. The upper-shoulder is white colored and on the left of the torso is a flame logo design. Beneath the torso is an indigo band with silver studs, loops hanging from the right side, and a winged diamond at the middle. Included is a studded indigo choker with a lightning bolt hanging from it, and a pair of red finger-less gloves with skinny indigo lining, studs on the knuckles, and a buckled strap on each wrist. Sticking out of the gloves are sleeves of alternate designs, one is indigo with silver lining and square studs beneath it, the other is checkered with a logo design inches from the top.

A short red skirt with blue and indigo sections on the lower left corner, separated by silver lines to match the accents. On the opposite side are silver designs to match the waistband straps and studs around the middle. An indigo jacket is tied around the waist, with two rows of square studs on the sleeve cuffs, and a matching row of studs around the bottom of the torso. Split fabric hangs tucked beneath the jacket, one side has checkered fabric, the other is white with silver loops hanging around the bottom, beneath a blue line on the hem, which is beneath several logo and emblem designs.

Red boots with a silver sole, lining, and studs. The leg is white for one foot, and dark indigo for the other, and on the side is a flame. The toe has studs across the top and a winged diamond, one has a red toe, the other has indigo. On one boot are logo designs while the other has two silver chains wrapped around it. The indigo boot has two rows of square studs around it, and on the right thigh is an indigo strap lined by studs, with a winged diamond at the center that has a diamond hanging from it.

Red sunglasses with silver studs around the eyes. On the corner is a silver lightning bolt and a flame. Ruby diamond earrings are included with a silver bead chain, one attached to a winged diamond, the other is a flame, along with an additional chain connected to the upper ear. 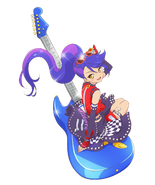 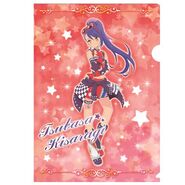 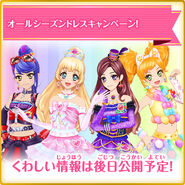 Add a photo to this gallery
Retrieved from "https://aikatsustars.fandom.com/wiki/Girls%27_Flag_Coord?oldid=142311"
Community content is available under CC-BY-SA unless otherwise noted.