Eternal Spice Coord (エターナルスパイスコーデ, Eternal Spice Coord) is a star premium rare coord made by the cool brand Spice Chord. It debuted in Part 5 of the Data Carddass Aikatsu Stars! Wings of Stars series and made a cameo appearance in Episode 100 of the anime.

A glittering indigo gradient dress covered in tiny stars and fabric reminiscent of colorful, mainly blue stained glass on the left corner of the chest, matching that around the navel where a pale blue ornate sun shape resides. Larger, singular colored stars adorn the left of the chest. Sewn to the right upper corner of the chest is a large ruby on a colorful sun-shaped base. The bottom of the fabric is trim a white frilly strip with a beaded chain over it, a pink ruffled strip with gold stars and glitter covering it, and a plain white scalloped layer. The remainder of skirt comes in a variety of fabrics, the main portion resembles the top but with darker shades, gold lining, an ornate border, and a diamond, wing, and treble clef design in the middle. This is followed by a silver layer with a stitched border and single pink diamond gem in the center, along with a light silver sun designed flap of fabric on the corners accent with a gold star, a stained glass layer with alternate gold crescent moon and sun designs, and pearl blue scalloping. A thick, long raspberry cloth hangs from each corner with glittering designs, pale blue details, and gem ornaments tied around the center. Silver star and diamond chains wrap around the skirt with pink gems on them, along with a turquoise sun ornament at each corner. Hanging from the sides are long pieces of fabric reminiscent of wings in a gradient of blue, purple, and pink. The user gains white opera gloves with gem star designs and a trim of pink feathers, along with a feathery white choker with gold detail, bead chains, and a single, large ruby gem.

Silver sandals with a bead chain going up the center, adorned by a pastel cyan sun ornament on top of the foot. Connected to that are three gold and pearl bead chains hanging from gold and blue star anklets. Covering the back of the foot is a purple flap lined with raspberry-pink feathers. Further up is are feathery wings of blue, purple, and pink gradient wrapped around each leg.

A round blue base with colorful stars surrounding a ruby gem on a colorful sun-shaped base. Tiny silver triangles and shards stick out of the top, each tipped with a gold pearl. Comes with red diamond earrings that have the silver sun emblem hanging from them, along with three tiny gems of garnet and sapphire. The user also gains blue wings with a gradient of purple and pink along the tips. Adorning the wings is a gold ornate piece on the top and middle, where they connect with tiny bead chains, gems, stars, and a big sun ornament on the upper corners. A few of the chains hang off of the wings with a gold star hanging from them. 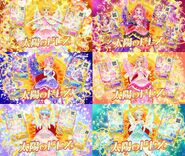 Add a photo to this gallery
Retrieved from "https://aikatsustars.fandom.com/wiki/Eternal_Spice_Coord?oldid=131488"
Community content is available under CC-BY-SA unless otherwise noted.