At Four Star Academy, there are four performance sets, song sets, acting sets, dance sets and fashion sets and the new students have to think about which set to try and enter. Meanwhile the welcome party for new students is under way and new students must stand on stage as a pair. The outcome of a lottery pairs Yume Nijino and her classmate Laura Sakuraba. The two people can only disagree, will their stage be a success?

The S4 begin their program with a segment on Idol-related news. Last week they held a ceremony and just a day before new students had their debut concerts. Yozora comments on how cute they were, and Hime shows a display of Yume's performance. As they go on to explain their plans to keep an eye on Yume from that moment, Yume and Koharu are revealed to be watching the segment. Yume laments how poorly her performance ended and feels she is undeserving of the attention. Koharu refuses to let her talk like that, though and claims that her performance was amazing. Yume admits she still doesn't remember anything and wonders if she had been lucky in doing so well and decides to take it as a good sign as Koharu convinces her that others who trained really well had a hard time.

In school, Yume is noticed by several of the girls. They change and make their way out to the track, where Anna decides to have them start off with learning to train their stamina. In doing so, they must get used to running exercises, followed by holding notes. Anna calls on Yume and asks her to try on her own- but complains when she is unable to do well enough as two girls behind Yume try to determine why she did so well on the stage.

When break approaches, Laura finds Yume and starts to talk to her. She teases her lack of abs and claims she is unable to see how Yume did so well.

Back in class, Anna brings up that they have a week before the Sorting Auditions. She teaches them the fundamentals by explaining until then, they are free to sit in on each of the classes to determine which one they would like to join. She reminds them of their self-producing and sends them on their way.

Yume and Koharu start with the Wind Dance Class and step into the stylish building. They find a man instructing the girls on stage to perform as cats as they watch in awe, only to express surprise when Yuzu runs up to them and tries to make the girls dance with her. The teacher gives the girls some supportive insistence- but incidentally intimidates them.

They take off for the Moon Beauty Class to find the girls in the middle of elegant training. The teacher approaches and asks them to have a seat on a bunch of strange spheres- rather than seats, then he resumes with the class. Yume and Koharu struggle to sit but they stare in shock upon realizing Yozora is balancing a huge water container on the top of her head. Right away Koharu is amazed, but falls off and realizes her glasses are gone. She takes them, only to realize it was Yozora who helped her. Quickly she apologizes for interrupting and Koharu compliments her skin, claiming she is able to deduce what a person is like by it. This leaves Koharu feeling as though she has decided to enter the Beauty Class in hopes of being noticed further by Yozora. She asks if she can leave Yume to stay and watch the other Beauty classes and takes off after Yume agrees.

At the Bird Theater Class, Yume finds several girls in a mass of tears, being instructed by their teachers. She compares their acting and Tsubasa intervenes to explain their acting completely missed her expectations. She then asks Tsubasa to demonstrate and Yume watches in awe as the atmosphere suddenly changes. The teacher compliments her and the girls attempt to try again. Deciding not to interrupt, Yume takes off for the final area: the Flower Song Class.

There she sees that several students have appeared to watch. Hime and several other girls, supposedly training, sit to have tea; causing the girls to believe they may not have even started yet. But to the students shock, they watch as the girls suddenly show pain or fall over and realize this entire time they have been training- their abdomens. This entire time Hime is seen to do fine, and Anna reveals that Hime came up with it on her own. Hime compliments the girls for trying so hard and Yume leaves- deciding Flower Song is exactly the class she wishes to join for the time being. In the hallway, she is approached by Laura, who reveals she also joined it. Laura then goes on to denounce Yume's desire to some day join S4 and be like Hime, since she too has set her eye on gaining the spot. With that she takes off, leaving Yume to wonder what Laura's problem is.

Late in the day, Yume is approached by two students with a box. They explain that everyone is drawing Lots to determine the pairs and put on a performance. It's a yearly tradition, and Yume eagerly chooses one of the number cards; only to realize she got paired up with Laura. Afterward, they remain in class to try to come up with an idea but spend the time bickering over it when their personalities and decisions begin to clash. It's then Yume realizes the only option left is to just put on a song for everyone and Laura agrees with it.

In the training room, Laura plays the piano while Yume practices singing notes. Laura criticizes her and asks if she is even trying after she starts to cough, then accuses her of holding back to avoid trying. Yume claims she isn't, and Laura tells her to leave if she isn't really trying considering how much effort she puts into it. Then she storms out while telling Yume to practice.

Yume expresses frustration and recalls what happened with Koharu in the Cafeteria when Laura approaches with something. She walks off after telling her she can use it, and Koharu gets up to leave so that she can practice. Yume opens the envelope to find a score inside, along with several instructions and she wonders if Laura put it together for her. Curiously she approaches her from behind to see her studying from several books and realizes how dedicated she is. With a new resolve, Yume decides to work harder and gets straight to training. During this, Laura stops to observe her in the middle of balancing on a ball while stretching and smiles with approval.

That evening Yume goes out for jogging when she runs into Laura. They decide to join each other and Laura asks Yume to help her with a part in the dance that she is struggling to get. She follows Yume and comments that she's able to understand it better, causing them to share a little laugh before they agree to wear their school dresses and decide to have fun while they perform at their best. It's then Laura notes how they finally managed to get onto the same page.

Eventually, the Welcome Party for the new students arrives. The girls enjoy tons of foods but they get interrupted by Anna- announcing the performances will be starting. After Koharu and another classmate put on a magic act, Laura and Yume prepare for their turn by changing into their coords and appearing on stage to perform "Aikatsu☆Step!".

Afterward, Laura and Yume walk through the room when they hear a group of girls discussing how poorly Yume did. They believe she didn't do well and must not have taken it seriously, causing her to grow depressed until Laura steps in to defend her. Laura tells them to keep their opinions to themselves and states that Yume did very well and took it seriously. She also tells them off by saying that some people have a gift for singing, and if they waste their time gossiping they will end up being passed by those. As Yume thanks her, she claims she only stated the truth before bringing up her plans to join S4 again. At first, Yume is surprised- but quickly accepts and agrees to be rivals with Laura.

In the Headmaster's office, he speaks with Hime in regards to the gap between Yume's performance this time and last. He watches the past performance and Hime remarks that it was a phenomenon the last time, and this leads him to decide that if Yume is deemed unfit to join S4, he will expel her whenever he wishes.

Main article: Episode 02 - The Two of Us are Rivals!/Image gallery 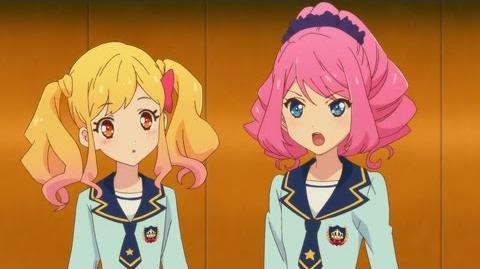 Retrieved from "https://aikatsustars.fandom.com/wiki/Episode_02_-_The_Two_of_Us_are_Rivals!?oldid=133374"
Community content is available under CC-BY-SA unless otherwise noted.