Yume Nijino is a first year middle school student who attends the idol school, Four Star Academy as a freshman student. Within the school is an idol group consisting of four idols known as "S4", and within that group is Hime Shiratori who Yume yearns to be partners with. To start this new life, there will be a show on the main stage for all freshman students to compete in. As this is the first stage, Yume is to show herself on that stage!?

Yume hurries along the train station to meet up with Koharu. After nearly running into a man she hurries upon realizing she's almost late. While exiting the train building, she thinks back to when she and Koharu were in class and they had to write down their future plans. When she noticed Koharu struggle, Yume revealed hers and suggests Koharu joins her in some day entering S4.

Yume finds Koharu waiting for her outside of the concert hall. She apologizes for keeping her and they hurry inside to get seated. They watch as S4 thank everyone while standing on stage, and Hime takes her turn to perform Start Line! for everyone. After the performance ends, the girls eagerly mail in their submission papers to join Four Stars Academy.

Eventually, the entrance ceremony is held. Before heading inside, Yume and Koharu comment on how the uniform looks on each other while wondering if they will get a chance to meet their beloved S4. They are taken to a large room, where a man takes to the stage and tosses aside a flower before he congratulates the entrants of the school. He formally introduces their upperclassmen, the members of S4 to everyone and he challenges the idols to become as radiant as they before allowing the group to take over. One by one they give words of encouragement to the students, starting with Yozora of the Moon Beauty Class. She tells everyone that while it is hard, they can make it through together. Next is Yuzu, who reveals she is a part of the Wind Dance class and promises to help the new students do their best. She is followed by Tsubasa, from the Bird Theater class who proclaims to whip everyone into shape using love. Lastly, Hime takes her turn- exciting Yume even further. From the Flower Song class, she asks that if they ever feel lost, to come and seek them. After finishing they congratulate the students and everyone applauds.

Outside, Yume walks down the hall while sadly lamenting the fact she and Koharu don't share a class. Before they split up, Koharu points out they'll still see each other most of the time anyway, and Yume heads inside to sit down. An adult woman enters the room and announces herself as Anna Hibiki, their homeroom teacher, and gets straight into the lesson. She starts by pointing out that individuality is highly important for self-production; which is a vital tool for Idols to use. With that she moves onto giving the girls their ID and Aikatsu Mobile. As Yume gets hers, she suggests that she makes sure to swing by the Dress Make Room later on to get her first coord, and Yume returns to her seat.

While giving herself some words of encouragement, Yume notes a girl knock on the nearby window. She tries to ignore her until the knocking increases and she is forced to let her in. The girl thanks Yume and steps aside, taking a seat while asking for her name. Before she can respond with her own, Anna calls for her to reveal it as Laura. She heads to the front and Anna comments that Laura must have a high opinion of herself to show up late, causing her to offhandedly apologize. However, she also believes this is a good sign and decides to let Laura off of the hook just this once. This surprises everyone, but Laura says nothing and takes her items before walking off. Anna calls the students to get seated again; only for the bell to ring and be dismissed right after. She tells them to make the best of their free time.

Back in the hallway, Yume and Koharu meet up. Some students plan to go back to their room, while some want to start training. Yume asks about exploring the campus together and Koharu brings up the App for a guided tour, which is hosted by S4. They use it to find their way around to the Cafeteria, the Four Star dorms area, and they stop at the Dress Make Room. An older classmate introduces them to the system and explains how it works- saying that all they need to do is to pick a color and style. Once they finish, the cards are print out and she hands them over to the girls before they exit outside.

It's then they watch as other girls run by, talking about S4. They join them to find a whole bunch of classmates lined up to watch the glamorous S4 prepare to take off for recording work. Yume and Koharu chat with each other regarding their popularity, even among celebrities, as the others cheer and S4 board their limo to be driven off of the school grounds. Yume suddenly gets an idea and heads off, surprising Koharu when she realizes she left.

Yume climbs up a tall tree in order to see Hime off, but after waving she realizes she's already too far gone. A strange boy calls to Yume- chastising her for climbing a tree in such an outfit, but in her panic she winds up falling and lands on his lap. He rudely asks her to get off, stating she's heavy and Yume awkwardly apologizes and gets up. The male asks what she was doing, but Yume asks why he is there since he is an outsider and shouldn't be. The male finds this amusing and tells her she can call security all she likes- as this is the boy side of Four Star Academy and she is technically the one intruding. Yume panics upon realizing this, and he mocks her by saying every year at least one girl doesn't realize this before mimicking her. When she gets upset and turns red, he laughs while comparing her to a tomato, then she runs off.

Back in the dorm room, Yume brings up that she got lost earlier. Koharu remarks she's always had a terrible sense of direction before revealing that a Class Sorting Audition will take place tomorrow.

The next day, the girls start their singing warmups. Yume is criticized by Anna, and Laura takes her turn; which earns a compliment. Throughout the day, Laura shows superiority over Yume when they train until they end the session. Despite how terrible she was, Yume remains hopeful that she will do better and tells this to Koharu. To make her feel better, Koharu points out how well Yume sings and how it always makes her feel happy even if the teacher didn't like it. They are joined by Anna again, who came to inform the group to change and gather in the Concert Hall for the Trainee Debut Concert underway; alarming the girls.

On stage, the students stand while Anna sends them off with a pep talk, explaining that they will be performing before their senior S4 members, along with teachers and other faculty watching. The girls retreat to the waiting room, with Koharu admitting that she is nervous until she is called on the stage. Yume encourages her and attempts to keep calm. When her turn is called, she thinks about her desire to shine like Hime and the rest of S4 and runs down the corridor to put her cards onto the panels before the room transforms. She changes into her coord and performs Aikatsu☆Step!.

After Yume finishes, everyone applauds her while S4 wonder if she's actually new or not, since she did really well for her first time. As Yume stands on the stage, she suddenly blacks out and falls to the ground, alarming everyone.

Yume awakens later on to find herself in the Infirmary with Hime. She is shocked to see her, and Hime compliments her job well done. Yume starts crying out of both excitement and embarrassment, proclaiming herself to be a long-time admirer of Hime. She suddenly gets confused after Hime calls her by name, and asks how she knows it, but Hime refuses to reveal anything and suggests she rest more. She promises to tell Yume later on and takes off as Koharu runs inside to check on Yume. She apologizes for worrying her, but claims she feels fine. Koharu brings up her amazing performance but when Yume is unable to remember it, Koharu shows the recording and reveals the various comments made by the upperclassmen and staffs. Yume is surprised to see how well she is performing, but is unable to understand why she can't remember any of it.

Main article: Episode 01 - The Beginning of a Dream/Image gallery 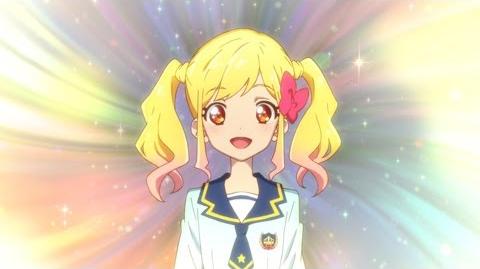 アイカツスターズ！ 第1話 ゆめのはじまり
Add a photo to this gallery
Retrieved from "https://aikatsustars.fandom.com/wiki/Episode_01_-_The_Beginning_of_a_Dream?oldid=56293"
Community content is available under CC-BY-SA unless otherwise noted.