Aurora Ciel Coord (オーロラシエルコーデ, Aurora Ciel Coord) is a rare coord by the cute brand Rainbow Berry Parfait. It debuted in Part 3 of the promotional collection of the Data Carddass Aikatsu Stars! Wings of Stars series and did not appear in the anime.

A milk blue gradient top with a gold border and trim of white frills on the torso, while ruffles are sewn to the shoulder strap. Print on it are clouds and rainbows, along with sparkles. On each shoulder strap is a rainbow gradient coloring it part way. The fabric down the center is cut to reveal the same coloring, along with a single gold heart button. Sewn to the middle of the chest is a turquoise ribbon with a blue gem and gold fringe. Comes with mesh gloves that have a white ruffled cuff with a gold band and blue bow. A gold chain necklace is included with a pink gem heart.

A diagonal cut skirt with the pattern from the top and trim of gold. This resides over a rainbow gradient layer, and lastly a solid white layer. A gold chain circles the waist with several pink gem hearts or four-point star ornaments. The chain connects to a turquoise ribbon with a gold and white design in the middle, along with a gold fringe and a large blue gem.

Turquoise pumps with gold bottom and foot lining. A blue gem resides on top of each foot, while a turquoise ribbon is tied on each ankle with gold fringe and a heart charm hanging from the middle. Comes with mesh stockings, each with a rainbow trail circling them that connects to a rainbow ribbon.

A small gold tiara with a winged heart in the middle adorned by a blue gem heart with a pink gem heart surrounding it. Comes with garnet gem stud earrings with gold beads and a four-point star hanging from it with a garnet in the center. 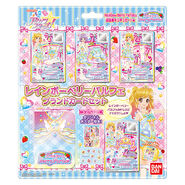 Retrieved from "https://aikatsustars.fandom.com/wiki/Aurora_Ciel_Coord?oldid=131745"
Community content is available under CC-BY-SA unless otherwise noted.