Start a Wiki
Aikatsu! Mobile (アイカツ！モバイル, Aikatsu! Mobile) is the tool that the Aikatsu system users must have. It has the Dress Make function on it where the idols can change the shape and color of their dresses.

A pink smartphone with a gold frame and an etched star design on the back, with the speaker in the shape of six dots within the star, next to the camera lense. On the bottom is the school emblem.

The front is light fuchsia with a simple designed border that has a gold shape at each corner. The screen is attached to a dark grey plate with a gold crown surrounded by four gold stars, while the bottom has a pink gem button surrounded by gold dots, a ribbon, four sparkle markings, and four stars.

Later, Bandai released a retail toy version of the Aikatsu! Mobile as a Premium Bandai's. 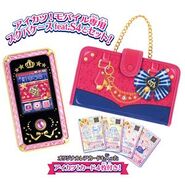 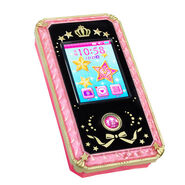 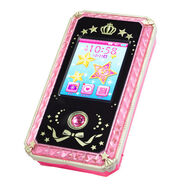 Add a photo to this gallery
Retrieved from "https://aikatsustars.fandom.com/wiki/Aikatsu!_Mobile?oldid=134605"
Community content is available under CC-BY-SA unless otherwise noted.