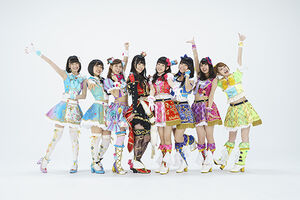 AIKATSU☆STARS! is an idol group who are the featured performers for songs in relation to the Data Carddass Aikatsu! game starting from the 2015 series, the Data Carddass Aikatsu Stars! game, as well as the the anime. The members of AIKATSU☆STARS! provide the singing voice of at least one main character in the Aikatsu Stars! universe, and are credited only by their given names written in hiragana. They sometimes collaborate on songs with members from their sister group, STAR☆ANIS.

As of February 4, 2018, the group has graduated from the anime and Data Carddass series, but still continues to work with the mobile game Aikatsu! Photo on Stage!!.

Characters labeled with an asterisk (*) are from the original Aikatsu! series.

Add a photo to this gallery
Retrieved from "https://aikatsustars.fandom.com/wiki/AIKATSU%E2%98%86STARS!?oldid=142431"
Community content is available under CC-BY-SA unless otherwise noted.